We start as usual in front of our hotel Panorama and drive first onto the state road of the Dolomites (SS 48), where we turn right and reach in about two kilometers Tesero. Behind the village square we cross the bridge over the Stava creek and turn right again. We continue uphill in the direction of Stava, Lavazè and Pampeago, cross the entire Val di Stava and reach the junction, from where the roads lead to Passo Lavazè  and Passo Pampeago. We take the road towards Lavazè, which will take us to Passo Pramadiccio and then to crossroads Cavalese – Lavazè. Once again we follow the signs “Lavazè” (and Bolzano), keep to the right and climb steeply to the pass.
Following the signs for Bolzano and keeping the little mountain lake on our left hand side we look forward to plunge into Val d’Egga, to the village of Ponte Nova. Passing by on a large woodworking company to the left we reach a crossroads. Going straight there, we are on the way to the capital city of the region of South Tyrol, Bolzano. However, we turn to the right  towards Passo di Costalunga and the lake of Carezza. The latter is considered one of the most beautiful mountain lakes in the Dolomites, a postcard motif par excellence. Not far from the lake, we pass the venerable Grandhotel, where once the Austrian emperor stopped off, pass further by ski lifts and a beautifully situated golf court. To our right we can admire the  impressive Latemar, while to our left rises the Catinaccio.
We turn left here, leave Passo di Costalunga to the right and continue towards Passo Nigra, which we reach after a few kilometers and a whole series of delightful curves. On the pass it is worth to look up to the towers of Vajolet, which are among the most famous peaks of the Dolomites. We leave the valley, past St. Cyprian and Tires and pass through a series of tunnels. One of them describes almost a 180 degree curve, but here we need to pay attention not to miss the turnoff to the road towards Presule and the castle of the same name, because it lies in a left hairpin bend, immediately after a wayside cross to the right of the road.
After Castle Presule follows a steep descent with average gradients of 15 % and therefore we should be particularly careful on this part of road. At the end of the descent we find the crossroads leading to Fié and Siusi.Here we turn right and climb  the road again uphill. Further on, we reach the high plateau under the Sciliar, from Siusi we can take a cable car to the Alpe di Siusi. Those who do not want to get out of the saddle, continue to Castelrotto and from there – following the signs “Ortisei “- to the Passo Pinei. This pass separates the Sciliar area from Val Gardena. We plunge now in the latter one and arrive soon at Ortisei, the main town of Val Gardena. The township, having a population of 4780 inhabitants, is the largest in this valley, known all over the world for its wood-carvers and the ski-sports. In 1975, the finals of the SkiWorld Cup were held here, a thrilling race between the local champion Gustav Thöni and his Swedish adversary Ingemar Stenmark.
As we drive further inland, we pass St. Christina (follow the sign “Passo Sella!”) and Selva di Val Gardena. Further on, the road becomes noticeably narrower and climbs steeper uphill to Plan de Gralba, where we continue to follow the direction of Passo Sella. We reach the pass at the altitude of 2240 meters and admire here not only the Marmolata, but probably even all the cyclists who have made it up here. After all, the stage to the Passo Sella makes part of the tour of the Giro d’Italia almost every year. Passo Sella is also part of the Sellaronda – together with Passo Gardena and Passo Prodoi – on which you can drive round the entire Sella massif: by bike or – in winter – skiing.
From Passo Sella we continue downhill for about eleven kilometers until we reach Canazei. There, we turn right, go through the entire Val di Fassa to Moena. Attention: At the roundabout at the entrance to Moena we have to avoid the tunnel, so as not to end up in the restricted traffic zone. From there we continue in the direction of Val di Fiemme and the Avisio to Predazzo, which we leave to our left hand side and take the second exit at the roundabout, in order to not enter the tunnel. The exit is marked with Cavalese / Ziano. After  few minutes we are back in Panchià, where we turn right at the first traffic light. 200 meters more and we are again in front of the Hotel Panorama. 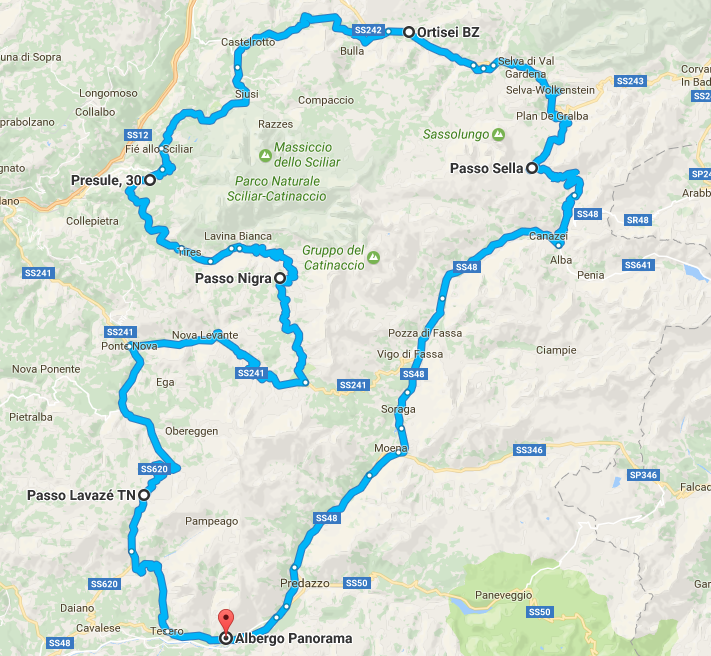